Back in January, I stumbled across a trend which seemed like a great way to counteract the doom and gloom of returning to work post-Christmas.

#100happydays was simple: participators would make a small, but regular effort to photograph what made them happy, over 100 days.  71% of participators apparently failed the challenge.  They asked: do you have time to be happy 100 days in a row?

I spend my life complaining that I don’t have time to do anything.  I accidentally fill my calendar and take on tasks and sometimes it feels overwhelming.  I also go through times when I struggle to see the light at the end of the tunnel and I feel, unequivocally, that nothing is making me happy.  Could this incredibly simple task be a way to change that?  Would I actually find 100 successive moments of happiness?  Who could POSSIBLY be that cheerful? 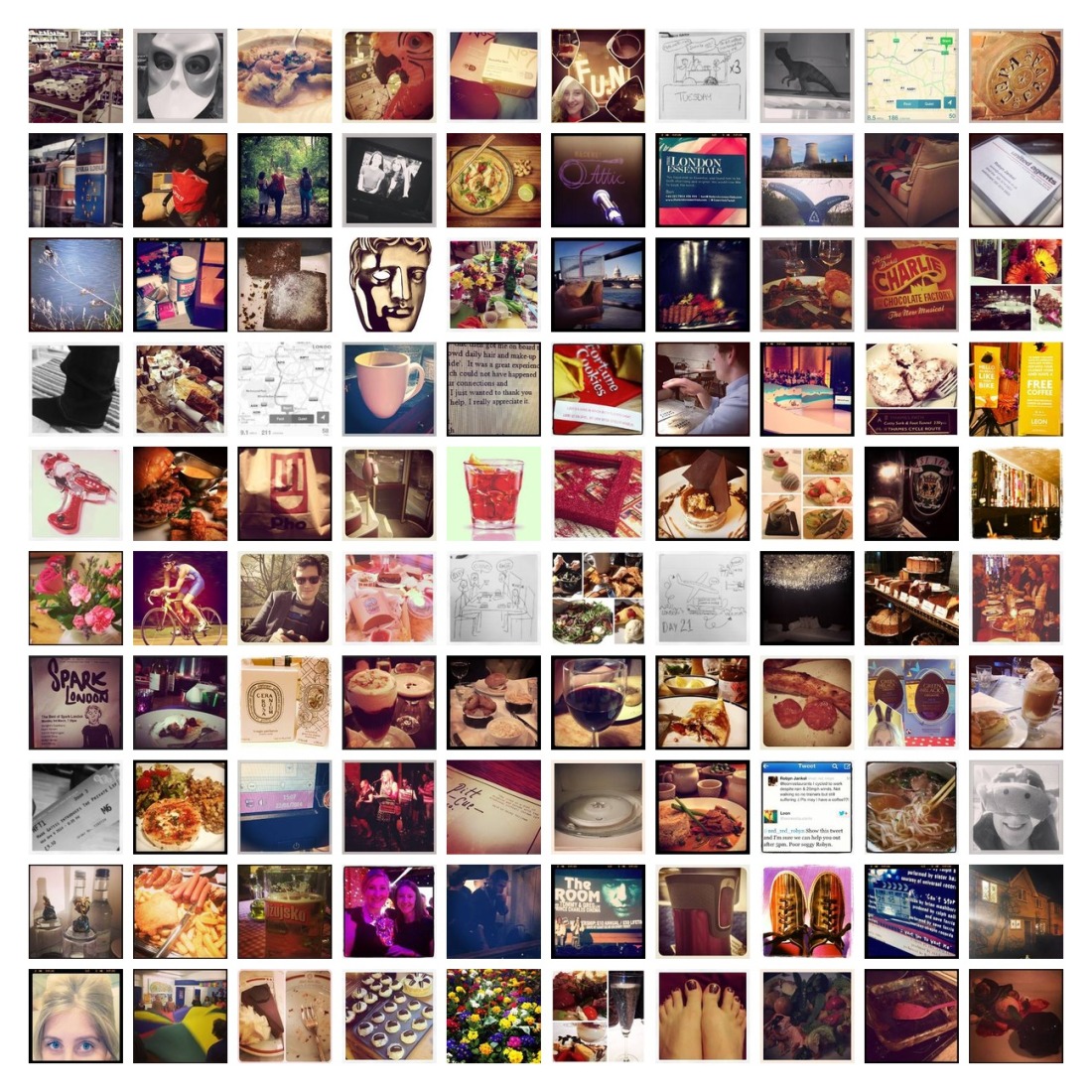 On 1st May I uploaded my 100th photo, and realised that I had unintentionally both begun and ended my series with pictures of food.  In fact, flicking through Instagram, a number of themes appeared, so I indulged in a bit of number-crunching.  Over 100 days I racked up:

Quite a lot of alcohol.  Domesticity makes me surprisingly content.  A pleasing amount of cycling-inspired happiness.  21 specific mentions of my boyfriend seems pretty healthy; not so many that we’re joined at the hip, not so few that one questions the point of the relationship.  Seeing on paper just how much joy I gain from food, I’m inspired to embrace healthy, flavoursome cooking and regular treats rather than banning entire food groups, or making an uncharacteristic, painful decision to cut the things I actively love out of my life, something I frequently consider but rarely have the willpower to pursue.  Health should remain paramount, and I know I eat when I’m sad; but from this I can also categorically see that food makes me genuinely happy, and arguably that’s worth, in the words of Bridget Jones, being “always just a little bit fat”.

I was lucky enough to be involved in some pretty exciting activities since the new year, including a couple of truly exceptional instances (the BAFTAs, a free trip to Charlie & The Chocolate Factory).  I also took 28 photos doing mundane stuff in my flat which is of no interest to anyone but me, plus a further 15 in the great outdoors, at other people’s houses, and on public transport.  Admittedly there were plenty (too many, my accountant father would suggest) meals in restaurants, but that’s my favourite pastime and expense of choice.  Furthermore, whilst I’m comparatively proactive and easily bored, many of the more memorable events were free, and accessible to all (Yelp being an obvious one).  Despite the numbers, it was nonetheless the relatively rare glamorous shots that friends considered a hallmark of my 100happydays and therefore, my life.  Clearly, perception is key.  I too see what I want to see, and believe that others are experiencing far more excitement than I am.  I’m writing this in my tatty beige kitchen, with a sink that won’t drain, surrounded by the squashed corpses of pantry moths that we’ve been battling for a month and I think: glamour?!  But perhaps all this does is highlight the more sinister, dangerous side of social media; a topic for another post . . .

In fact, I had initially worried what I would do on days when nothing was worthy of putting on Facebook, or that I would upload a photo of something trivial and people would sneer at my pitiful standards.

But I was ignoring one of the few rules imparted by the organisers: “It is not a happiness competition or a showing off contest. If you try to please / make others jealous via your pictures – you lose without even starting”.  Instead, my purpose in keeping it public was to take advantage of the pressure to continue, even if I felt unable to dredge up a happy moment or muster the energy to log on to Instagram.

That expectation – the feeling of “but I HAVE to find something” – was, for me, the most significant element.  Like most people, I have a real tendency to slip into self-pity and despair after a shit day, and it’s a self-fulfilling prophecy.  My default attitude was “X happened, and Y said this, and I did Z, and everything’s hideous, and together this proves that I’m a terrible person, and destined to be miserable forever”.

But for the last three-and-a-half months, something changed.  Suddenly I didn’t have that frankly luxurious option of wallowing in self-pity and acknowledging only the bad stuff.  My end-of-day review evolved from “That was the day from hell.  These bad things happened and therefore it was a write-off” into an internal dialogue which went something like this:

Internal voice 1: That was the day from hell.
Internal voice 2: Something good must have happened at some point.
IV1: Nope, it was shit, everything was shit, and I am shit.
IV2: Well, you must have smiled at SOME point, and you’d better think quickly, because you have to find a photo to show for it.
IV1: I can only think of horrible stuff because it was a horrible day and I refuse to entertain the idea that there was a single moment of positivity in the entire 24 hours.
IV2: Think harder.
IV1: THERE WAS NOTHING.
IV2: Didn’t we see some nice flowers on the way into work . . . ?
IV1: That doesn’t count.
IV2: Why not? It made you smile.
IV1: No, it was a horrible day, it doesn’t matter if I smiled.
IV2: It only has to be a moment.  It made you smile at that moment.
IV1: But –
IV2: And more to the point . . . it WASN’T 24 hours of misery.  It may only have been a moment . . . but there was a moment of genuine happiness.
IV1: Well –
IV2: Not non-stop unhappiness.  Not a total waste of a day.  Not an unparalleled disaster.  Not a failure.

It’s a subtle shift, and not one that everybody needs to make, but one which is surprisingly easy to instigate when you don’t allow yourself an alternative.  No need to pretend: it WAS  a crap day.  But that doesn’t mean every minute was a waste of time.  It was easy to only see the bad when that was all I looked for – but in making a concerted effort to find just one tiny moment of joy in my otherwise doom-ridden day, I was amazed.  Sometimes I actually recalled two or three.  And on a longer scale, if I find myself slipping and wondering what good stuff’s happened to me lately, I can look at this collage of moments and remember how I was not only genuinely happy, for however short or long a period, every single day – but that most of those moments came from my own efforts, or were simple pleasures, easily repeated.

If you’re unsure of this exercise, please: give it a go.  The more unlikely you think it is that you’ll complete it – the less happiness you believe exists in your own life – the more you’ll gain when you do.  I never thought a challenge involving Facebook, Instagram and a hashtag would change my outlook on life but I have a sneaking suspicion that that’s exactly what it’s done.